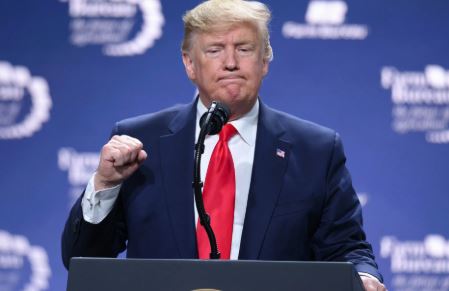 So now with the Republican controlled Senate  rush to acquit Trump in this rigged trial, he will soon be free to continue using foreign countries or any other illegal acts to ensure his re-election in 2020. What the Republicans have done is to coronate Trump a King  who now has the green light to operate above the laws of our democracy without any consequences.

Once Trump declared that if he shot someone in the middle of Broadway, nothing would happen and unfortunately, he was correct. In fact, this expected acquittal is like declaring all crimes are legal as long as the King and his court are the perpetrators.  And of course, somehow, these antics always usually benefit his Russian benefactors.

For openers, foreign countries –as well as U.S. businesses–, can be cajoled, intimidated, extorted, bribed to force compliance with Trump’s all-out scorched earth plan to retain the throne.  In our new system one party rule there are no enforceable laws to stop Trump.

If it were not for a few brave whistle blowers, House Speaker Nancy Pelosi, Rep. Adam Schiff,  the independent GAO and the Democrats who valiantly exposed Trump’s crimes, his wrong-doing would ahave just remained that underground shadow government that Trump, Rudy Giuliani and their cronies operate to enrich themselves and keep their Boss in power.  “They were all in the loop,” Trump knew everything,” according to Lev Parnas, a Giuliani aide who has been speaking to news sources. He, of course, was among the many first-hand witnesses, who the Senate did not allow as witnesses, an unheard of practice in all but sham trials.

One spot to watch is what House Speaker, Nancy Pelosi, has said, “all roads lead to Russia.” In 2016, Trump publicly called upon Russia to find thousands of his opponent Hillary’s e-mails and reports show that they hacked into cores of strategic websites and used fake websites to create chaos in tightly contested voting sites.

So now with all the rigmarole, it should not be forgotten that the Ukraine mess where U. S taxpayers funds were used to try to force Ukranian military officials to “dig up dirt,” on his main rival Joe Biden also had a pro-Russian benefit.

Witnesses before the House of Representative, such as the acting chief Ukraine envoy, testified that Russia was the chief beneficiary of Trump’s decision to hold up military aid to Ukraine. “Our holding up of security systems that would go to a country that is fighting aggression from Russia for no good policy reason, no good substantive reason, no good national security reason is wrong,” said Taylor.

Aside from Trump acting as if he is more of an agent of Russia’s Putin than some of his own citizens, there is so much a king can do that a president who is accountable to legalities could not do.  First of all, Trump can will use any means to stay in office and fuel his private agenda. That could mean starting wars, draining tax funds from states trying to correct voting irregularities, diverting funds from the military to build his wall, cutting off Obamacare that helps the non-rich afford  health coverage, raiding budgets for the homeless, the hungry, the sick to continue the transference of wealth to the Billionaire club.

In addition, he can continue purging from the Executive Branch, the Diplomatic Corps and the military all who dare not kowtow to his demands. Recent tapes show that Trump order Parnas “to take her out,” a reference to Ukraine Ambassador  Marie Yovanivitch who was criticizing Trump’s move to stop the much needed aid to Ukraine. Some noted that phrase has been associated with Mafia activities and the ambassador, herself, said she felt threatened.

There of course, is still one cliffhanger.  About 70 percent of those polled said they wanted the GOP controlled Senate to allow crucial witnesses and documents.  So far that isn’t happening. And If the public still remains unwilling to be governed by a monarchy rather than a democracy, the Trump kingdom can still  come down.