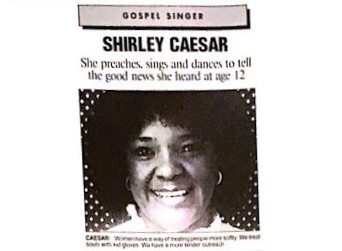 Shirley Caesar, born in 1938 in Durham, N.C. is revered as the Queen of Gospel Music. Her career has spanned six decades as a singer, songwriter, recording artist, author, pastor, and director of an outreach feeding center. She has won eleven Grammy Awards, fifteen Dove Awards, and thirteen Stellar Awards. In 1979, she performed at the White House for President Jimmy Carter. Caesar began singing at the age of 10 and has recorded over forty albums, exploring her gift and spreading messages of faith. At an early age, she joined the Caravans singing group, Albertina Walker, Dorothy Norwood, Inez Andrews, Delores Washington, and James Cleveland and sang and recorded with them from 1958 until 1966 when she formed her own group and eventually went solo. A graduate of Shaw University she also served a stint on the Durham City Council. She served as International First Lady of the governing group over Greater Mt. Calvary Holy Church and pastored Mt. Calvary Word of Faith Church in Raleigh with her husband Bishop Harold Ivory Williams until his death in 2014. Caesar has a unique style of singing, preaching and doing “the Holy Dance.” Like Mahalia Jackson, she has refused to sing any kind of music but Gospel.

“I remember chasing Shirley Caesar’s passed through the streets of Durham, N.C., one summer. As we rode and her red, phone equipped Mercedes, she showed me her grade school, the house where she was born and yard where she jumped and shouted after she was “born again” at age 12. We made a final stop at the cemetery where her mother, Hallie Caesar, is buried. We returned to the Durham Civic Center where hundreds were gathered to celebrate the 17th anniversary of her Ministries. No barely five foot two, including her Spike heel shoes, she’s a giant in and out of the pulpit. “

Read more about Shirley Caesar in our exclusive interview only available in my book, And Still We Rise.