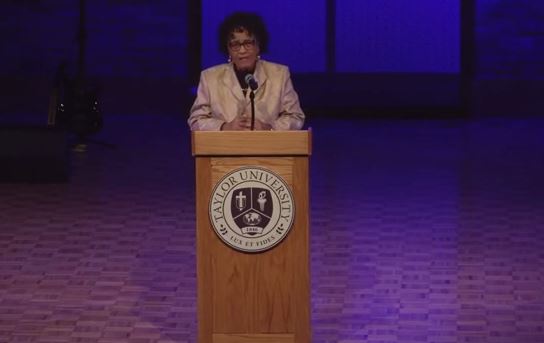 The speech I gave this year at Taylor University, a predominantly white evangelical university in the Indianapolis suburb, was perplexing yet rewarding. I understood that white evangelicals voted more than 80 percent for Trump in 2016.  I came there with a disdain for all who would dare vote for Trump as president, but I left feeling somewhat like Coretta King, my mentor, who could see the good in everyone.

Going to Taylor University touched me for several reasons.  The leadership there is at least trying to see a side of life that is foreign to  many of them. They have not walked in my shoes and neither have I in theirs. Some of their top officials had just returned from a  civil rights tour, including Memphis where Dr. Martin Luther King Jr., was killed, Birmingham where white haters filled four little girls in a church basement bombing. They invited me to speak knowing that I did not come armed with an assault rifle, nor a powder puff.

The 1000 -member student body, read a peace pledge to work together as a human right movement, heard and sang the theme song of We Overcome and gave me one of the warmest welcomes ever. I listened to some of their stories, understood that many only watch Fox News like I only watch CNN and MSNBC, that they see the economy moving along, which is good news for their future., but I see a man who is emerging as a vindictive White Supremacist dictator.

Yet on college campuses I do not find the hatred vitriolic spirit that some of  their adult leaders have. I see hope rising. If more adults who think differently work with them and we share our love for Christ, things could change for both of us.  Evangelicals have a history of working in the anti-slavery movement. At Taylor, a man they embrace and have a statue in his honor is Samuel Morris, a black immigrant from Liberia, who in the 1800s came to the campus, with such a powerful prayer spirit, it helped the school from closing.

Book me at your next event:

2020-03-05
Previous Post: Many were bloodied for us to gain the right to vote so use it don’t abuse it.
Next Post: Trump lies infecting the public

60 Afghans and 12 U.S. Marines were killed in the explosions. So far no group has claimed responsibility for the attack.

END_OF_DOCUMENT_TOKEN_TO_BE_REPLACED

Taliban in Control: Chaos for All People

The rise of the Taliban means chaos for everyone. The decision to pull out of Afghanistan was a controversial to begin with. Now with people scrambling to evacuate, how will our world leaders handle the situation?

END_OF_DOCUMENT_TOKEN_TO_BE_REPLACED

Uncle Willie and Aunt Maggie are Back!

Aunt Maggie takes over this phone call, I wonder what she has to say this time?

END_OF_DOCUMENT_TOKEN_TO_BE_REPLACED

Joe BIDEN is the real PRESIDENT of these UNITED STATES.

While the nation and the world grieved, not once has Trump attended any of Floyd’s three home-goings. Since President Obama left us, we have had a dictator, an oppressor, a liar and a White Supremacist. To me this disqualifies. So to me the presidency is vacant until someone worthy of that honor comes.

END_OF_DOCUMENT_TOKEN_TO_BE_REPLACED

He was a gentle giant, non-violent and as all of us honor his memory let us not disgrace his memory with arson and looting. This dishonors him. It also dishonors our past. And plays right into the hand of Trump.

END_OF_DOCUMENT_TOKEN_TO_BE_REPLACED

Blacks Have Two Problems: Them and Us

Until we can understand violence is not normal and we continue to dismiss black-on-black murder we will lose many valued souls. In the nation’s capital, around where I live many people go to bed every night with the sound of gunshots ringing in their ears, afraid to let their children come out and play. Elderly people cannot go sit on their porch for fear of being killed like Mrs. Lucas Silence will not help this. Black People have two terrible problems. Them and Us and until we solve both we be merely surviving and not thriving.

END_OF_DOCUMENT_TOKEN_TO_BE_REPLACED

She Survived COVID-19, Others in This Story Are Not As Fortunate..

Please know I am only sharing to let someone out there know that A. If you are currently sick or isolated, you are not alone, you will make it out the other side, I know this with my whole being, and B. For education purposes because I too thought I was invincible, that this will never affect me or my life)