Above the Chatter with Dr Barbara Reynolds 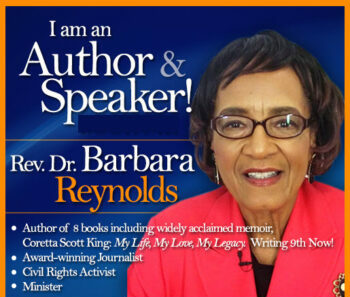 Rev. Dr. Barbara Reynolds brings a ‘voice and a view’ that reminds us all to say what’s on our minds and cherish what’s in our heart.

A successful and world-renown journalist, she has penned more than 500,000+ words for global news organizations including The Washington Post, USA Today, and Essence magazine. She’s appeared on The Oprah Show, C-Span, CNN, and hosted her own satellite radio show for more than a decade.

An anointed elder who served as Chaplain of the Week at Chautauqua Institution (a retreat for U.S. Presidents) and continues to serve as Elder at Greater Mount. Calvary Holy Church (Washington,D.C.) and leader of Harriet’s Ministry.

Dr. Reynolds was one of the first African American women to be awarded a Nieman Fellow at Harvard University and is a former professor at Howard University’s School of Communications.

She’s received numerous awards and accolades including the Martin Luther King Jr. Drum Major for Justice Award, Leadership Washington; and the History Makers Award for Outstanding Leadership. She is also a 7-time book author and co-author of the posthumous memoir of her friend and iconic civil rights leader, Coretta Scott King.

The Columbus, Ohio native holds a Bachelor’s degree in Journalism, a Master’s degree in Religious Studies, and a Doctorate in Pastoral Counseling. Further, she serves on the board of advisors for major policy organizations including Black Women for Positive Change and led an AARP Committee for Seniors.

In her spare time, she can be found ever learning something new and exhibiting unending love for those she encounters.

2019-11-08
Previous Post: Harriet Movie Features a Model of Courage for Today
Next Post: And Still We Rise Interviews with 50 black Influencers with Dr. Barbara Reynolds and USA Today