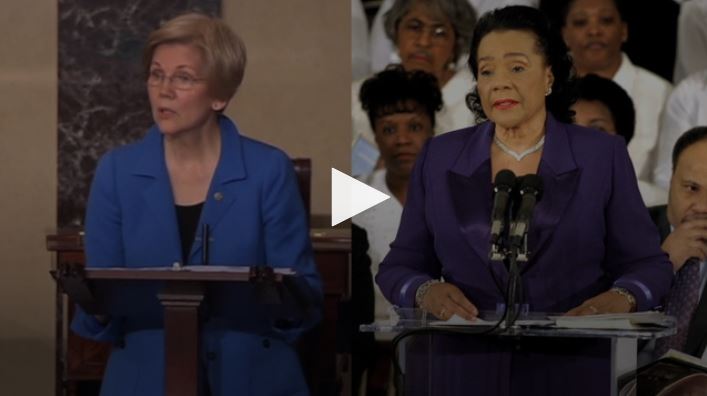 This is viewer supported news. Please do your part today.DONATE

The Senate has confirmed Jeff Sessions as the United States attorney general after a 52-47 vote Wednesday evening. Sessions’s confirmation has faced widespread protests over his opposition to the Voting Rights Act and his history of making racist comments. The vote capped a contentious 24 hours that began Tuesday night, when Massachusetts Senator Elizabeth Warren was silenced and rebuked by the Senate for reading a 1986 letter written by Coretta Scott King denouncing Sessions, who was at the time being considered for a federal judgeship. For more, we speak with Rev. Dr. Barbara A. Reynolds. She worked with Coretta Scott King on her memoir, “Coretta Scott King: My Life, My Love, My Legacy.”

This is a rush transcript. Copy may not be in its final form.

NERMEEN SHAIKH: The Senate has confirmed Jeff Sessions as the United States attorney general after a 52-to-47 vote Wednesday evening. Sessions’ confirmation has faced widespread protests over his opposition to the Voting Rights Act and his history of making racist comments. The vote capped a contentious 24 hours. On Tuesday night, Massachusetts Senator Elizabeth Warren was silenced and rebuked by the Senate for reading a 1986 letter written by Coretta Scott King denouncing Sessions, who was at the time being considered for a federal judgeship. Presiding officer Montana Republican Senator Steve Daines first interrupted Warren.

SEN. ELIZABETH WARREN: “It has been a long, up-hill struggle to keep alive the vital legislation that protects the most fundamental right to vote. A person who has exhibited so much hostility to the enforcement of those laws”—

SEN. STEVE DAINES: The senator is reminded that it is a violation of Rule 19 of the Standing Rules of the Senate to impute to another senator or senators any conduct or motive unworthy or becoming a senator.

SEN. ELIZABETH WARREN: Mr. President, I don’t think I quite understand. I’m reading a letter from Coretta Scott King to the Judiciary Committee from 1986 that was admitted into the record. I’m simply reading what she wrote.

AMY GOODMAN: That’s Senator Elizabeth Warren. She was then allowed to continue reading the letter and speak further about her oppositions to Sessions. But after 20 minutes, Warren was again interrupted—this time by Senate Majority Leader Mitch McConnell.

MAJORITY LEADER MITCH McCONNELL: The senator has impugned the motives and conduct of our colleague from Alabama, as warned by the chair. Senator Warren, quote, said Senator Sessions has used the awesome power of his office to chill the free exercise of the vote by black citizens. I call the senator to order under the provisions of Rule 19.

SEN. ELIZABETH WARREN: Mr. President, I am surprised that the words of Coretta Scott King are not suitable for debate in the United States Senate.

MAJORITY LEADER MITCH McCONNELL: She was warned. She was given an explanation. Nevertheless she persisted.

AMY GOODMAN: “She persisted.” Senator Warren was then prohibited from speaking for the remainder of the debate over Sessions’ confirmation, after the Senate passed a party-line rebuke against her. Following Warren’s silencing, several male Democratic senators urged their colleagues to vote against Sessions by reading the same letter. They were not rebuked. In the letter, Coretta Scott King cites Sessions’ attempted prosecution of three black civil rights workers in Marion, Alabama, for voter fraud.

You know, interestingly, Reverend Dr. Barbara Reynolds, this may be the first time that Coretta Scott King’s testimony against Sessions was actually put into the Congressional Record. She had sent it in 30 years ago, but at the time the judiciary chair, Senate Judiciary Chair Strom Thurmond, a fierce segregationist, did not put her testimony into the record. So, 30 years later, Senator Warren got it put in by reading it. Is that right?

REV. BARBARA REYNOLDS: Yes, that’s correct. But when you look at the spectacle of a female U.S. senator trying to read a testimony of an American hero, Coretta Scott King, who was a witness to what happened in Marion, Alabama, what she stood up for, and both of them were silenced, it just made me feel that we were back to the 1950s. It was an appalling sight.

But I want to say this about who she was, because she was not talking theoretically. I mean, she was—she grew up in Marion, Alabama, where this whole case with the Marion Three took place. These were civil rights leaders who were trying to register blacks to vote, and Sessions prosecuted them. Now, this is important because of who she is and why she should have been heard, because she knew what most of us do not know, because she lived it. When she was 15 years old, her home that she grew up in was burned to the ground. Her father had two businesses. One was a sawmill. And that was burned to the ground. But they had no vote. They had no voice. And they were considered nobodies that the police didn’t have to protect. And this is what—the civil rights movement, that she was a co-partner in with Dr. Martin Luther King, corrected that. And we come into the ’80s. Now, blacks had more voting power in places like Marion, Alabama. And she wanted people to know what had happened, because she represented thousands and thousands of people who could not vote, had no power to protect themselves. And so now we come to 1986, and she’s reporting in her testimony of what was the progress that had been made and how she never wanted America to go back to that. Why not read that?

The original content of this program is licensed under a Creative Commons Attribution-Noncommercial-No Derivative Works 3.0 United States License.

Please attribute legal copies of this work to democracynow.org. Some of the work(s) that this program incorporates, however, may be separately licensed. For further information or additional permissions, contact us.

2017-02-09
Previous Post: The grit and grace of Coretta King
Next Post: AUDIO STORY My Life, My Love, My Legacy – Coretta Scott King