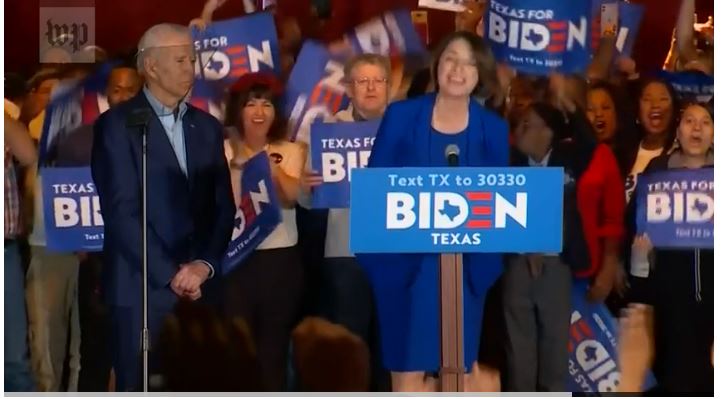 Will the Bernie supporters blow it like they did in 2016. The hands that once picked cotton will now have a large roll in picking a president thanks to the big buildup black voters gave Biden in South Carolina. Biden with passionate supporters can beat Trump, but if the Bernie supporters forget the prize is beating Trump and not each other we can take back our country. In 2016 when Bernie did not get the nomination, many of his supporters did not vote for Hillary, a factor that gave us Trump, the worst president in U.S. history.

Bernie is not even a Democrat, doesn’t have the history Biden does in supporting the causes of people of color and is talking about Medicare for all which instead of building on Obamacare would take some of the best provisions away . Whichever of the guys win it, I hope one picks Elizabeth Warren as v.p,. She is smart and tough enough to beat Trump, but sexism will prevent this. So what if Bernie does win the nomination, I will be calling on everyone to support him and just hold my breath and just pray that I was wrong about Bernie not being able to beat Trump. The problem is, however, every time I say I hope I am wrong, I am usually not.

Tuesday, when 14 states will cast their votes.

A consolidation of the party’s moderate wing came as fears grow that Sen. Bernie Sanders (I-Vt.), a self-described democratic socialist, could amass an insurmountable lead in delegates. A third of the pledged delegates for the party’s presidential nomination are up for grabs on Tuesday.

With a decisive win in Saturday’s South Carolina primary and his spate of new endorsements, Biden is seeking to turn the nominating contest into a two-person race against Sanders. The Vermont senator is leading polls in delegate-rich California and Texas and is aiming to build a formidable lead ahead of the Democratic National Convention.

Former New York mayor Mike Bloomberg will appear on ballots Tuesday for the first time, facing the first real test of his candidacy after spending half a billion dollars on his campaign. Sen. Elizabeth Warren (D-Mass.) and Rep. Tulsi Gabbard (D-Hawaii) also are competing in the Super Tuesday contests. Investor Tom Steyer dropped out of the race over the weekend after disappointing showings in South Carolina.

More on the election:

2020-03-03
Previous Post: Trump just can’t help lying about the coronavirus
Next Post: Many were bloodied for us to gain the right to vote so use it don’t abuse it.