Coretta Scott King: My Life, My Love, My Legacy 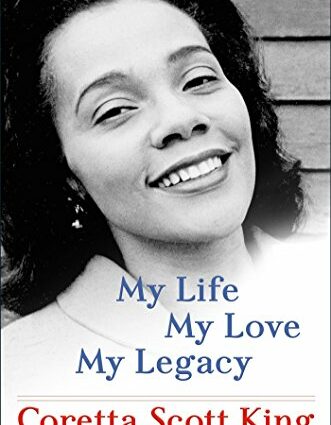 All copies purchased here include:
-Authentic Autograph by the Author
-Free Shipping

Born in 1927 to daringly enterprising parents in the Deep South, Coretta Scott had always felt called to a special purpose. While enrolled as one of the first black scholarship students recruited to Antioch College, she became politically and socially active and committed to the peace movement. As a graduate student at the New England Conservatory of Music, determined to pursue her own career as a concert singer, she met Martin Luther King Jr., a Baptist minister insistent that his wife stay home with the children. But in love and devoted to shared Christian beliefs as well as shared racial and economic justice goals, she married Dr. King, and events promptly thrust her into a maelstrom of history throughout which she was a strategic partner, a standard bearer, and so much more.

As a widow and single mother of four, she worked tirelessly to found and develop The King Center as a citadel for world peace, lobbied for fifteen years for the US national holiday in honor of her husband, championed for women’s, workers’ and gay rights and was a powerful international voice for nonviolence, freedom and human dignity.

Coretta’s is a love story, a family saga, and the memoir of an extraordinary black woman in twentieth-century America, a brave leader who, in the face of terrorism and violent hatred, stood committed, proud, forgiving, nonviolent, and hopeful every day of her life.

FROM FROM THE BOOK JACKET:

“After her home was bombed in Montgomery, her father and Daddy King came to take her and baby Yolanda away. She would not budge, and Martin did not budge. If she had wavered…there probably would not have been a Montgomery bus boycott.” — Andrew Young, Friend of the King Famiy and former United Nations Ambassador.

“If I had not had the kind of with the fortitude, strength, and calmness of Coretta, I could not have stood up to the ordeals and tensions…Coretta proved to be that kind of wife with qualities to make a husband when he could have so easily been broken.“ –Reverend Dr. Martin Luther King Jr.

“Coretta was kind to those people others might look down upon, people who were unlucky or uneducated or unloved. She was serious about being a good Christian. I mean acting it. Living it. Being it. Showing it. Sharing it. I will never stop missing her,” —Maya Angelou

2019-11-13
Previous Post: New Chief and First Black Director of the Smithsonian Institution, Dr. Lonnie Bunch
Next Post: OUT OF HELL, LIVING WELL: HEALING FROM THE INSIDE OUT