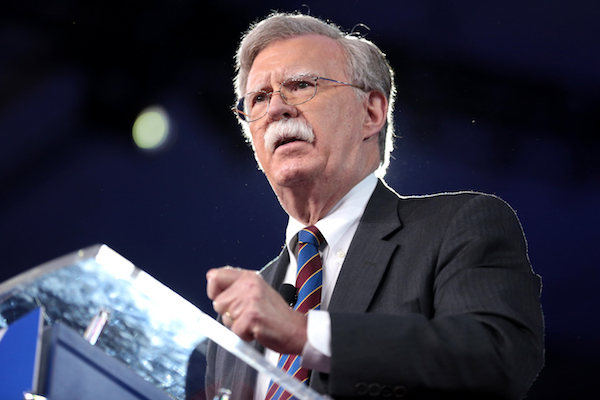 Even if watching “Perry Mason” or “Law and Order” has been your only contact with the criminal justice system you would know real trials have witnesses and documents which the fraudulent Republican-controlled impeachment shenanigans are determined not to allow. But now there is a political hand grenade that could blow the lid off the GOP’s schemes to block important witnesses to provide testimony or documents that could shed a negative light on the president.

This new bombshell is the release of allegations in former national security adviser John Bolton’s book manuscript that President Trump had illegally tied military aid to Ukraine contingent on probes into former Vice President Joe Biden, Trump’s most feared political rival. In Bolton’s not-yet-published book, this account is not hearsay but allegedly firsthand conversations that Bolton had with Trump and key advisers, such as Secretary of State Mike Pompeo.

Bolton’s lawyers have said their client is ready to testify in the Senate impeachment trial. And if he does, Bolton, who has a 40-year career in foreign service, just might be that white knight in shining armor the Democrats are hoping for.

In fact, the GOP senators’ refusal to hear Bolton and other key White House officials will only add more credibility that the trial was a sham to hide a corrupt president and will not fare well with voters, which polls said 70 percent wanted the trial to include witnesses and documents.

The mustachioed Bolton has been described potentially as the president’s worst nightmare. Trump has directed all executive branch officials not to comply with congressional subpoenas. Most senior White House officials have complied with Trump’s gag order, but since Bolton has resigned his position, he could testify, but it is a safe bet the Senate won’t allow it.

Here are some of the comments Bolton has already made that could boil up Trump’s already hot water; Bolton reportedly told some “all in the loop” Trump aides that he did not want to be part of “whatever drug deal” certain other officials were “cooking up” in Ukraine.

Bolton has also described Rudy Giuliani as Trump’s personal bagman who spearheaded what witnesses have described as operating a backdoor channel in Ukraine, as a problem. Bolton was also reportedly opposed to the smear and intimidation campaign Giuliani and Trump carried out against Marie Yovanovitch, the US’s ambassador to Ukraine, who was trying to block some of the irregularities.

Former senior administration officials have told news sources that people in Trump’s orbit were frightened over what Bolton might divulge, but others feel Bolton might pull back because he has much to lose depending on how he plays his cards. First of all, billionaires and organized crime elements that reportedly are part of Trumps’ inner circle have the resources to buy loyalty, handsomely award their friends, and gravely punish their enemies.

Bolton has a Political Action Committee that wealthy donors use to support Republicans who support Bolton’s hawkish foreign policy experts, according to the Washington Examiner. If Bolton turns on Trump all that cash will dry up and since Trump is certain not to be convicted by the GOP controlled Senate, why should Bolton damage his future by issuing a potentially damaging blow?

We should have learned by all the hopes that were dashed by Robert Mueller’s probe which although important was undercut by Attorney General William Barr which Mueller didn’t fight. The GOP’s top echelon is part of the same eco-system, sharing friends, funds and futures. Could Bolton really exist outside the GOP bubble?

Furthermore, if the senators refuse to allow Bolton to testify within the trial, Bolton’s book will be even more of a money-making best seller. And after the trial, Trump will have free reign to continue his criminal activities to help him remain in office. So the only loser here is truth — which in the GOP climate really doesn’t matter.